Introduction to the Klingon Calendar

The Klingon calendar system consists of a 432 "day" long "year". Each "year" is broken up into nine "months." Each "month" consists of six "weeks", while each "week" is eight "days" long. A Klingon "day" is sixteen "hours" from sunrise to sunrise. One Klingon "hour" takes forty-eight "minutes", each of which are made up of forty-eight "seconds." As on Earth, the basic Klingon calendar does not perfectly account for the exact time Qo'nos takes to orbit its' star.  So every fifth year, a leap day is added.
Klingon years are known as "DIS", months are "jar", and weeks are "Hogh."  Klingon days are "jaj", while hours are "rep." Minutes in Klingonese are "tup", and seconds, "lup."
Coincidentally, the length of Klingon years and Earth years are almost exactly the same. Only a few hours discrepancy exists.  A difference of 1374 years is given between the two systems in almost every instance of use of the Klingon calendar. This sometimes results in an error in a book or comic because while the Kenson-Bennett calendar system does have each Klingon year being almost exactly one year long, each Klingon year does not begin on the equivalent of January 1st. So account should be made for what time of year before assuming a simple subtraction of 1374 years.

The nine Klingon months are: Jo'vos, Soo'jen, Lo'Bral, Maktag, Merruthj, Doqath, Xan'lahr, Nay'Poq, and A'Kahless. Each consists of forty-eight Klingon days. Most of these names originated from Steve Kenson, and a few from canon.
In Christopher L. Bennett's explanation of the Klingon calendar, A'Kahless was said to the first month of the year, with the "new year" break occuring between Nay'Poq and A'Kahless.  I have changed this to having the "new year" occur between A'Kahless and Jo'vos, so that A'Kahless is now the final month of the year.
As explained in my examination of the Klingon Day of Honor, a specific Klingon date was given for the Day of Honor in the DS9 novel "Armageddon Sky," the fourth day of the ninth month. This date actually ended up occurring during the month of A'Kahless.  So A'Kahless, by necessity has to be the ninth month of the year.  My best option was to make this change, following the evidence from the Lit-verse where it led. This is really the only major change to the Kenson-Bennett Klingon calendar that I have made. 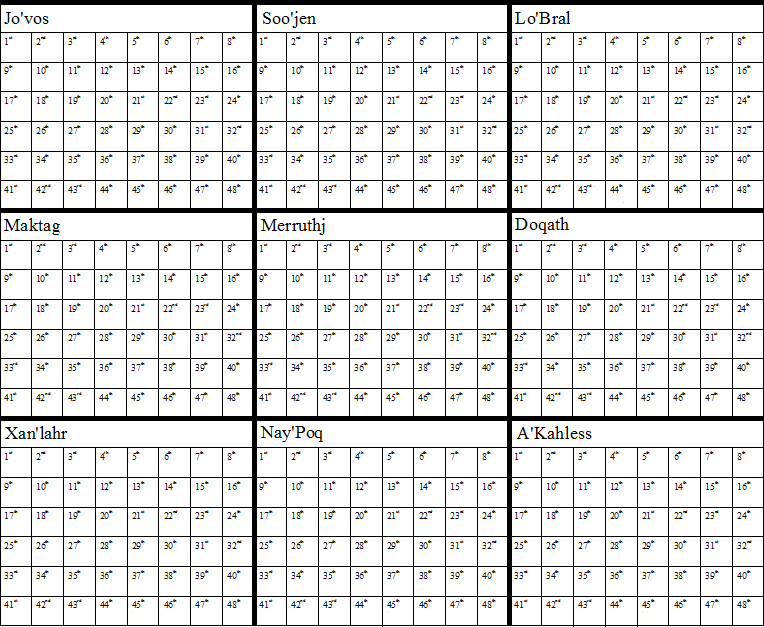